In the White Helmets, we have a motto.

“To save a life is to save all of humanity.”

It’s hard to put into words the depth of emotion that I felt watching this.

There’s the mere destruction, which is unbelievable. Just how much damage that has been done to Syria is staggering. It is impossible to fathom how anyone is still surviving in Aleppo. It’s also really difficult to understand why, dear God why, are more bombs being dropped?! Assad and Russia seem to have either completely and utterly misunderstood the real scope of the rebels, and ISIS, or, they simply do not care. Either way, the victim is always the voiceless citizen, the child, and the family, whose dreams of becoming a great contributor to their people and country have been shattered into merely being a survivor of the next barrel bomb or refugee trek.

Then there’s the “God is great” call. In Arabic, “Allah, hu akhbar.” In our current socio-religious political climate, that phrase, at least in the West, is virtually equated with terrorism. It has been suggested to me a couple of times, that hearing that phrase, (again, in Arabic) should cause anyone within earshot to steel up, brace oneself, and “fight or flight” the source of that outcry. Yet, here are these heroes–in every sense and definition of the word–when saving a child cry, “Allah, hu akhbar!” It is incredibly inspiring and disheartening that this one phrase has such distinctly opposite meanings, depending upon who is saying it.

And then there is their philosophy, their creeds, and credo, the purpose and mission behind their work. Rather than comment extensively, I have simply recorded their statements below. They do not belong in a documentary alone. They belong in the annals of human history.

Dear friends, please watch this documentary, and be challenged once again at the crossroads of good and evil to never despair, and to reach for life because when I watch these men work, I am moved to believe that God really is great.

And I thought, “It is better to do humanitarian work than to be armed. Better to rescue a soul than to take one.” 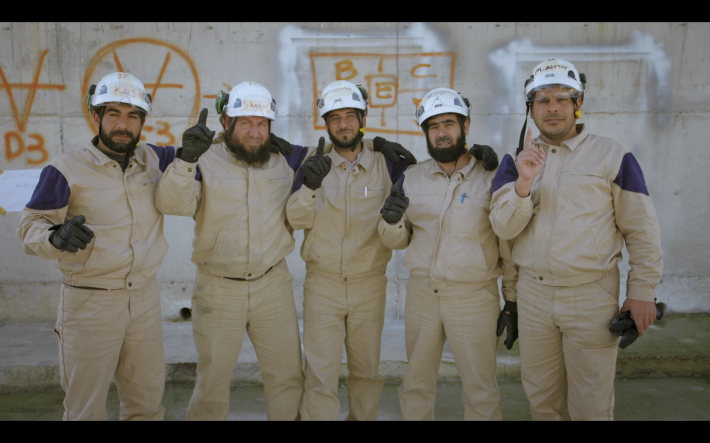 Any human being, no matter who they are or which side they’re on, if they need our help, it’s our duty to save them. 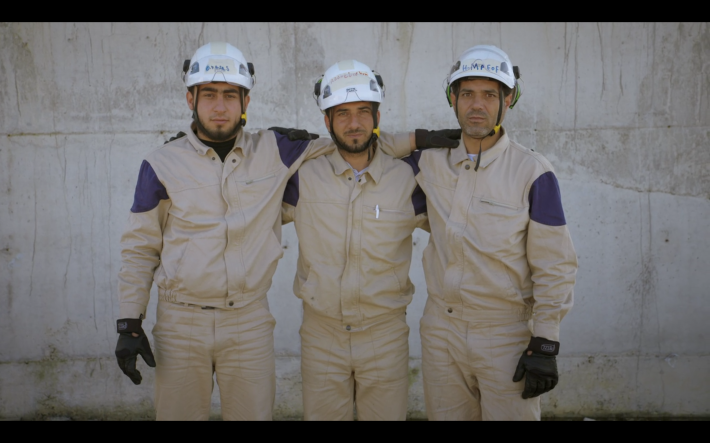 I try as hard as possible to save every person under the rubble whether they are young or old, I consider them all to be my family.

All lives are precious and valuable. A child, even if he is not my son, is like my son. I cannot explain it.

It’s a hard feeling, that you are away from your family, but life requires sacrifice.

We are always optimistic that what’s to come is better. Justice will prevail one day. Without hope, what good is life?

Do you know the feeling that you get when you plant a small seed and it grows into a beautiful bush? That’s how we feel that this baby is still alive thanks to God and to our work. We feel very proud. I’ve learned many lessons from baby Mahmoud. Patience, persistence, hard work, and never to lose hope, no matter what happens, they will live. I’m willing to sacrifice my soul for the sake of the people.

This job is sacred.

I am just trying to do something for the people, and for my country.