TED | Kai-Fu Lee: How AI Can Save Our Humanity (Transcript & Reflections)

I’m going to talk about how AI and mankind can coexist, but first, we have to rethink about our human values. So let me first make a confession about my errors in my values.

It was 11 o’clock, December 16, 1991. I was about to become a father for the first time. My wife, Shen-Ling, lay in the hospital bedgoing through a very difficult 12-hour labor. I sat by her bedside but looked anxiously at my watch, and I knew something that she didn’t. I knew that if in one hour, our child didn’t come, I was going to leave her there and go back to work and make a presentation about AI to my boss, Apple’s CEO. Fortunately, my daughter was born at 11:30 — sparing me from doing the unthinkable, and to this day, I am so sorry for letting my work ethic take precedence over love for my family.

My AI talk, however, went off brilliantly. Apple loved my work and decided to announce it at TED1992, 26 years ago on this very stage. I thought I had made one of the biggest, most important discoveries in AI, and so did the “Wall Street Journal” on the following day.

But as far as discoveries went, it turned out, I didn’t discover India, or America. Perhaps I discovered a little island off of Portugal. But the AI era of discovery continued, and more scientists poured their souls into it. About 10 years ago, the grand AI discovery was made by three North American scientists, and it’s known as deep learning.

Deep learning is a technology that can take a huge amount of data within one single domain and learn to predict or decide at superhuman accuracy. For example, if we show the deep learning network a massive number of food photos, it can recognize food such as hot dog or no hot dog.

So this network, if given the request to make a speech about AI, he, or it, might say —

And maybe in another language?

You didn’t know he knew Chinese, did you?

So deep learning has become the core in the era of AI discovery, and that’s led by the US. But we’re now in the era of implementation,where what really matters is execution, product quality, speed and data. And that’s where China comes in. Chinese entrepreneurs,who I fund as a venture capitalist, are incredible workers, amazing work ethic. My example in the delivery room is nothing compared to how hard people work in China. As an example, one startup tried to claim work-life balance: “Come work for us because we are 996.” And what does that mean? It means the work hours of 9am to 9pm, six days a week. That’s contrasted with other startups that do 997.

And the Chinese product quality has consistently gone up in the past decade, and that’s because of a fiercely competitive environment. In Silicon Valley, entrepreneurs compete in a very gentlemanly fashion, sort of like in old wars in which each side took turns to fire at each other.

But in the Chinese environment, it’s truly a gladiatorial fight to the death. In such a brutal environment, entrepreneurs learn to grow very rapidly, they learn to make their products better at lightning speed, and they learn to hone their business models until they’re impregnable. As a result, great Chinese products like WeChat and Weibo are arguably better than the equivalent American products from Facebook and Twitter.

And the Chinese market embraces this change and accelerated change and paradigm shifts. As an example, if any of you go to China, you will see it’s almost cashless and credit card-less, because that thing that we all talk about, mobile payment, has become the reality in China. In the last year, 18.8 trillion US dollars were transacted on mobile internet, and that’s because of very robust technologies built behind it. It’s even bigger than the China GDP. And this technology, you can say, how can it be bigger than the GDP? Because it includes all transactions: wholesale, channels, retail, online, offline, going into a shopping mall or going into a farmers market like this. The technology is used by 700 million people to pay each other, not just merchants, so it’s peer to peer, and it’s almost transaction-fee-free. And it’s instantaneous, and it’s used everywhere. And finally, the China market is enormous. This market is large, which helps give entrepreneurs more users, more revenue, more investment, but most importantly, it gives the entrepreneurs a chance to collect a huge amount of data which becomes rocket fuel for the AI engine. So as a result, the Chinese AI companies have leaped ahead so that today, the most valuable companies in computer vision, speech recognition, speech synthesis, machine translation and drones are all Chinese companies.

So with the US leading the era of discovery and China leading the era of implementation, we are now in an amazing age where the dual engine of the two superpowers are working together to drive the fastest revolution in technology that we have ever seen as humans. And this will bring tremendous wealth, unprecedented wealth: 16 trillion dollars, according to PwC, in terms of added GDP to the worldwide GDP by 2030. It will also bring immense challenges in terms of potential job replacements. Whereas in the Industrial Age it created more jobs because craftsman jobs were being decomposed into jobs in the assembly line, so more jobs were created. But AI completely replaces the individual jobs in the assembly line with robots. And it’s not just in factories, but truckers, drivers and even jobs like telesales, customer service and hematologists as well as radiologists over the next 15 years are going to be gradually replaced by artificial intelligence. And only the creative jobs — I have to make myself safe, right? Really, the creative jobs are the ones that are protected, because AI can optimize but not create.

But what’s more serious than the loss of jobs is the loss of meaning, because the work ethic in the Industrial Age has brainwashed us into thinking that work is the reason we exist, that work defined the meaning of our lives. And I was a prime and willing victim to that type of workaholic thinking. I worked incredibly hard. That’s why I almost left my wife in the delivery room, that’s why I worked 996 alongside my entrepreneurs. And that obsession that I had with work ended abruptly a few years ago when I was diagnosed with fourth stage lymphoma. The PET scan here shows over 20 malignant tumors jumping out like fireballs, melting away my ambition. But more importantly, it helped me reexamine my life. Knowing that I may only have a few months to live caused me to see how foolish it was for me to base my entire self-worth on how hard I worked and the accomplishments from hard work. My priorities were completely out of order. I neglected my family. My father had passed away, and I never had a chance to tell him I loved him. My mother had dementia and no longer recognized me, and my children had grown up.

So I am fortunately today in remission. So I can be back at TED again to share with you that I have changed my ways. I now only work 965 — occasionally 996, but usually 965. I moved closer to my mother, my wife usually travels with me, and when my kids have vacation, if they don’t come home, I go to them. So it’s a new form of life that helped me recognize how important it is that love is for me, and facing death helped me change my life, but it also helped me see a new way of how AI should impact mankind and work and coexist with mankind, that really, AI is taking away a lot of routine jobs, but routine jobs are not what we’re about.

Why we exist is love. When we hold our newborn baby, love at first sight, or when we help someone in need, humans are uniquely able to give and receive love, and that’s what differentiates us from AI.

Despite what science fiction may portray, I can responsibly tell you that AI has no love. When AlphaGo defeated the world champion Ke Jie, while Ke Jie was crying and loving the game of go, AlphaGo felt no happiness from winning and certainly no desire to hug a loved one.

So how do we differentiate ourselves as humans in the age of AI? We talked about the axis of creativity, and certainly that is one possibility, and now we introduce a new axis that we can call compassion, love, or empathy. Those are things that AI cannot do. So as AI takes away the routine jobs, I like to think we can, we should and we must create jobs of compassion. You might ask how many of those there are, but I would ask you: Do you not think that we are going to need a lot of social workers to help us make this transition? Do you not think we need a lot of compassionate caregivers to give more medical care to more people? Do you not think we’re going to need 10 times more teachers to help our children find their way to survive and thrive in this brave new world? And with all the newfound wealth, should we not also make labors of love into careers and let elderly accompaniment or homeschooling become careers also? 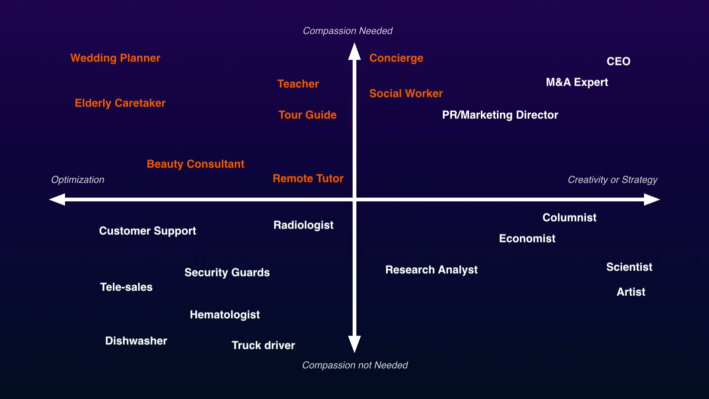 This graph is surely not perfect, but it points at four ways that we can work with AI. AI will come and take away the routine jobs and in due time, we will be thankful.

AI will become great tools for the creatives so that scientists, artists, musicians and writers can be even more creative. 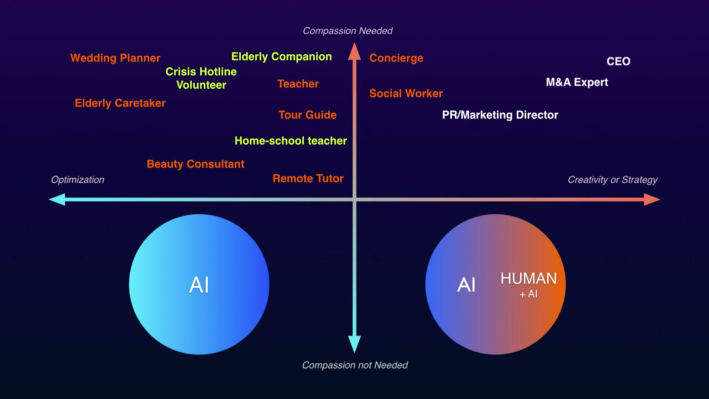 AI will work with humans as analytical tools that humans can wrap their warmth around for the high-compassion jobs. 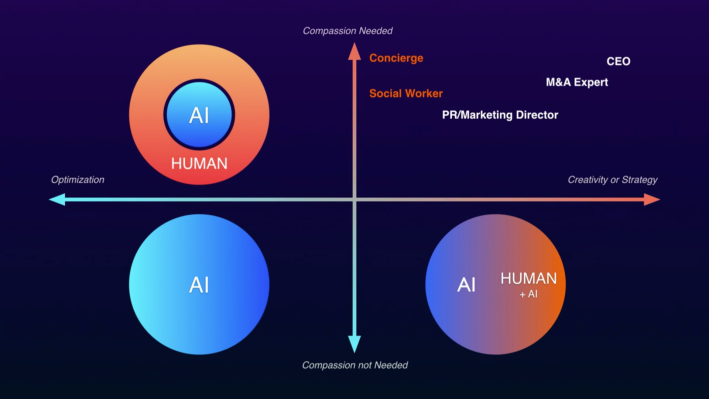 And we can always differentiate ourselves with the uniquely capable jobs that are both compassionate and creative, using and leveraging our irreplaceable brains and hearts. 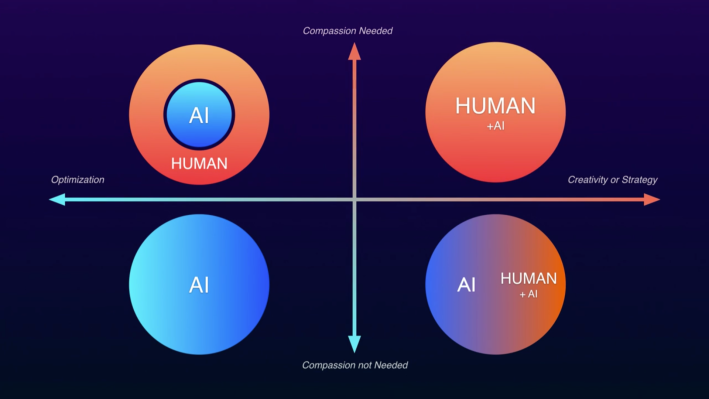 So there you have it: a blueprint of coexistence for humans and AI.

AI is serendipity. It is here to liberate us from routine jobs, and it is here to remind us what it is that makes us human. So let us choose to embrace AI and to love one another.

It is striking to me that my particular profession–religious/clergy–which arguably has the longest and most robust foundational history for creating meaning, purpose, and values through the stories and theologies that we have constructed, has perhaps lost significant authority to be meaningful due to these religious gifts–which were designed for humanism–having been used, rather, as cudgels for conformity. Systematic theologies, sacred texts, and even religious ceremonies are all “technologies” of some sort. Will they, too, go the way of other more pedestrian activities of humanity?

Perhaps more important, will we–clergy–embrace the gift, that technologies render some human activities irrelevant, making way for the deepest and most important parts of our souls? In line with Kai-Fu Lee’s final line, Is religion even capable of “embracing AI?” Perhaps that is contingent upon if we can even truly love one another.