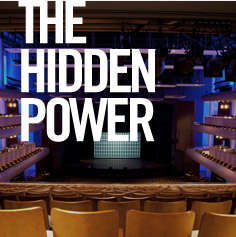 (all quotes below are from Marshall McLuhan unless otherwise noted.)

Christianity is fundamentally a communication event.

Have you ever heard:

The METHODS change but
the MESSAGE stays the same?

I need to take a wrecking ball to that assumption. Because, in fact, the MEDIUM is the MESSAGE.

Our conventional response to all media, namely that it is how they are used that counts, is the numb stance of the technological idiot. For the content of any medium is the juicy piece of meat carried by the burglar to distract the watch dog of the mind.

The content or message of any particular medium has about as much importance as the stenciling on the case of an atomic bomb.

In other words, our content is merely the slight of hand while the magician slips the watch from our wrist. The medium always working beneath our conscious awareness.

We BECOME what we BEHOLD.

Our thinking patterns actually begin to mirror the things we use to think with. We’re just not aware of it.

This shaped our assembly line and becomes the archetype for architecture. Did you know that pews did not exist in church prior to the printing press? We become what we behold.

It also shapes our imagination. For the first time in the history of the world, it began to reshape how we think of the Gospel and it became compressed into a linear sequential uniform and repeatable process.

Apologies for Sins + Believe in Jesus = Go to Heaven

Notice the linear and sequential way that faith was imagined and the incredible suspicion of feelings, another result of the print age.

Between 1850 and 1890, there was a flow of uninterrupted inventions all of which harnessed the power of electricity. They completely dissolved and reconstituted the communication structure in the west.

There is one invention that has a tremendous power to shape us. The photograph. It began to recast the world as an icon. And in the process, it did something fascinating. First, it began to retrieve elements of the medieval catholic world where there were nothing but stained glass images used to communicate, prior to the print culture. But there is another thing that images do, when over extended, when they become so fired up in the age we live in now, an image age, we begin to lose our capacity for abstract thought.

The boy is sad 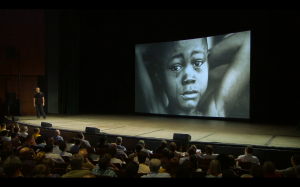 “The picture is worth a thousand words.” Wonderful saying, but it misses the truth. It assumes that the mediums are interchangeable, and they are not. The medium actual excludes certain content.

This ad is actually telling us something true about the images. Images pin the logical side of your brain to the back of your skull. It is this reason that advertisers use images to sell things, not essays. Essays invite argument and debate. So they come to rest warmly in the right hemisphere of your brain.

This is what accounts for the hemispheres of the world. 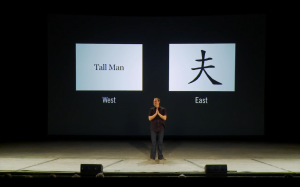 Notice how they both perfectly reflect the word and the image we were just describing.

This shapes your entire philosophical worldview. “We become what we behold.”

In the west, the Greeks were the first to perfect the phonetic alphabet. And shortly after that they invented a way of thinking called the syllogism, a form of logic that is linear, sequential and is at the heart of reason and rationality.

In the east, the entire philosophical worldview can be represented by an image. A symbol of the unity of the opposites.

But what about our technologies, many of them “text-based.”

Many of the text-based technologies are creating a “right-brained” literacy. Example:

To the left brain, this is merely a colon and an end parenthesis. To the right brain it is a smiley face.

This image is a person smoking dope. 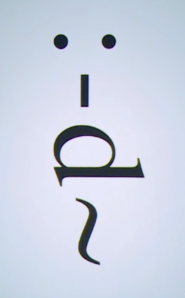 This is the universal text symbol for “getting high.”

Corporations are also getting into the act. What does the letter “L” mean? Nothing. That’s the power of the phonetic system. Each symbol actually has to mean nothing. Thus, you can create an infinite number of words using 24 symbols. Whereas in Chinese, if you want to create a new idea, you have to create a new symbol.

Now, let me ask the same question. What does the letter “L” mean?

You’ll be happy to know that corporations have taken over every letter of the alphabet: 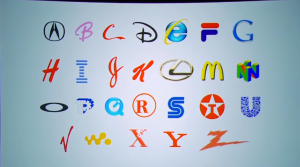 When you become this kind of image based culture, and it is so overwhelming to the brain, this is what happens to all of us:

Our capacity for reading continues to drop in an image based culture.

“There once was an old man.” Picture that. If I could project what you were all seeing, we would see over 1000 different images. The word expands and opens possibilities and probabilities.

Now, let’s try this again. “There once was an old man.”

In this moment, every one of your images of an old man was summarily replaced by this one image. With an image I was able to hijack all of your images so that you know in the story that I am about to tell about an old man, this is the old man. You know exactly what he looks like. It limits the possibilities. It captivates the imagination. But it created a shared experience. We were all able to have the same experience at the same moment.

So, why does this matter for people like us at an event like this? The question we have to ask is What does the image actually do? Then you can ask whether you should use it or not.

If you want to unleash people’s imaginations, then images are poorly suited to do that. Words are far more powerful. But if you want to create, cultivate, and foster a shared experience, images are perfect.

My point is that we have to understand the images before we use them.

We are creating spaces in circles rather than squares, because that is a consequence of being saturated in images.

It also affects how we read the Bible.

During the Middle Ages, the stories of Jesus became prominent over Paul’s letters. Why? It is almost impossible to depict in a stained glass window, “You are saved by grace through faith.” In the Middle Ages the literacy rates were almost zero. So the depictions of Jesus were prominent.

When the Printing Press got discovered and the Bible got channeled through it, a guy by the name of Paul got “rediscovered.” And a guy by the name of Martin Luther, in his preface to his translation of the New Testament, under a heading entitled, “Which are the true and noblest books of the Bible?” he writes:

John’s Gospel is the one, fine, true, and chief gospel, and is far, far to be preferred over the other three and placed high above them. So, too the epistles of St. Paul, and St. Peter far surpass the other three gospels, Matthew, Mark, and Luke. – Martin Luther, Preface to the New Testament

Why are these preferred? They tell the theology of Jesus, not the stories of culture. In an image based culture, the pendulum is swinging back. We talk about being a “follower” of Jesus. Now, we’re not at risk of losing Paul, but he is being reinterpreted in light of Jesus. Jesus is now the center of gravity in this discussion thanks to the image based culture.

We become what we behold.

None of this is the least bit surprising to Jesus. Jesus articulated this long before McLuhan. In Mark,

The emphasis is that the wine is also new. The medium and the content go hand in hand. They’re inseparable.

So, what do we do? But this is also a warning. We’re so eager to make judgments (what is good or bad)… My deepest desire is that we take a step back, take a deep breath, and become aware. Awareness is 90% of the battle here. If we can first begin by understanding before we critique, we are far better off, and very few of us have taken the time to understand. We move really quickly to critique. My invitation is to step back and understand before you critique. If we do that, understand and explore, we’ll actually be able to use our media rather than be used by them.

My main quibble (and it is a small one) is that the Mark 2:22 saying is more likely to be about “teachings” and “disciples” than it is about “medium” and “message,” though I suppose one could argue that is a distinction without a difference. Perhaps. But this begs the question. How much of this “medium/message” madness must we also accept when it comes to the teachings of Jesus himself? That may be a far riskier question than some are willing to ask, but it seems necessary if we are to get at the truth.

I am deeply thankful to Hipps for this presentation and lament only that the vast majority of ministers and Christians will, a) never read or be exposed to these ideas, b) never truly understand or accept them. Which poses another problem, in conjunction with Kevin Kelly’s book, What Technology Wants and other ideas from McLuhan. Namely, that we are the technology and the medium. That every technological tool is an extension of who we are. If that is the case, and our pendulum is swinging back and forth at a macro level in our culture, and that is affecting our thinking, processing, and inter-species conflict and conversation, does that mean there is no such thing as “objectivity?” That even objective ideas and ideals are merely an imbalanced subjectivity?

Ooh. I’ve got other thoughts too.

What about the progression and intermingling of these mediums? And why are we so resistant to them at times if they truly are us? And, does this make God also transformational with the culture? And does the desire by fundamentalism to codify and canonize a particular culture a kind of denial and self-hatred? And if it’s a paradox, and “both/and,” does this make the eastern way “more right” than the western?