TED Talks Worth Talking About | Adora Svitak: What Adults Can Learn From Kids 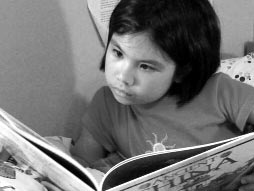 Here is the entire transcript of her talk:

I want to start with a question. “When was the last time you were called childish?” For kids like me, being called childish can be a frequent occurrence. Every time we make irrational demands, exhibit irresponsible behavior or display any other signs of being normal American citizens, we are called childish, which really bothers me. After all, take a look at these events: Imperialism and colonization, world wars, George W. Bush; ask yourself: Who’s responsible? Adults.

Now, what have kids done? Well, Anne Frank touched millions with her powerful account of the Holocaust, Ruby Bridges helped end segregation in the United States, and most recently, Charlie Simpson helped to raise 120,000 pounds for Haiti on his little bike. So, as you can see evidenced by such examples, age has absolutely nothing to do with it. The traits the word childish addresses are seen so often in adults that we should abolish this age-discriminatory word when it comes to criticizing behavior associated with irresponsibility and irrational thinking.

Then again, who’s to say that certain types of irrational thinking aren’t exactly what the world needs? Maybe you’ve had grand plans before, but stopped yourself thinking, “that’s impossible,” or “that costs too much,” or “that won’t benefit me.” For better or worse, we kids aren’t hampered as much when it comes to thinking about reasons why not to do things. Kids can be full of inspiring aspirations and hopeful thinking, like my wish that no one went hungry or that everything were free kind of utopia. How many of you still dream like that and still believe in the possibilities? Sometimes a knowledge of history and the past failures of utopian ideals can be a burden because you know that if everything were free, then the food stocks would become depleted, and scarce [?] and lead to chaos. On the other hand, we kids still dream about perfection. And that’s a good thing, because in order to make anything a reality, you have to dream about it first.

In many ways our audacity to imagine helps push the boundaries of possibility. For instance, the Museum of Glass in Tacoma, Washington [my home state–yoo hoo Washington] has a program called Kids Design Glass and kids draw their own ideas for glass art. Now, the resident artist said they got some of their best ideas through the program because kids don’t think about the limitations of how hard it can be to blow glass into certain shapes. They just think of good ideas. Now, when you think of glass, you might think of colorful Chihuly designs, or maybe Italian vases, but kids challenge glass artists to go beyond that into the realm of broken-hearted snakes and bacon boys, who you can see has meat vision.

Now, our inherent wisdom doesn’t have to be insiders’ knowledge. Kids already do a lot of learning from adults, and we have a lot to share. I think that adults should start learning from kids.

Now, I do most of my speaking in front of an education crowd, teachers and students, and I like this analogy. It shouldn’t just be a teacher at the head of the classroom telling students “do this, do that.” The students should teach their teachers. Learning between grown ups and kids should be reciprocal.

The reality, unfortunately, is a little different, and it has a lot to do with trust, or a lack of it. Now, if you don’t trust someone, you place restrictions on them, right. If I doubt my older sister’s ability to pay back the 10 percent interest I established on her last loan, I’m going to withhold her ability to get more money from me until she pays it back.–True story by the way.–Now, adults seem to have a prevalently restrictive attitude towards kids from every “don’t do that, don’t do this” in the school handbook, to restrictions on school internet use. As history points out, regimes become oppressive when they’re fearful about keeping control. And, although adults may not be quite at the level of totalitarian regimes, kids have no, or very little say in making the rules when really the attitude should be reciprocal, meaning that the adult population should learn and take into account the wishes of the younger population.

Now, what’s even worse than restriction is that adults often underestimate kids abilities. We love challenges, but when expectations are low, trust me, we will sink to them. My own parents had anything but low expectations for me and my sister. Okay, so they didn’t tell us to become doctors or lawyers or anything like that, but my dad did read to us about Aristotle and Pioneer Germ Fighters when lots of other kids were hearing The Wheels on the Bus Go Round and Round. (Well, we heard that one too, but Pioneer Germ Fighters totally rules.)

I loved to write from the age of four, and when I was six my mom bought me my own laptop equipped with Microsoft Word. Thank you Bill Gates, and thank you, mom. I wrote over 300 short stories on that little laptop, and I wanted to get published. Instead of just scoffing at this heresy that a kid wanted to get published, or saying wait until you’re older, my parents were really supportive. Many publishers were not quite so encouraging–one large children’s publisher ironically saying that they didn’t work with children. Children’s publisher not working with children? I don’t know, you’re kind of alienating a large client there. Now, one publisher, Action Publishing, was willing to take that leap and trust me, and to listen to what I had to say. They published my first book, Flying Fingers–you see it here–and from there on, it’s gone to speaking at hundreds of schools, keynoting to thousands of educators, and finally today, speaking to you.

I appreciate your attention today, because to show that you truly care, you listen.

But there’s a problem with this rosy picture of kids being so much better than adults. Kids grow up and become adults just like you. Or just like you, really? The goal is not to turn kids into your kind of adult, but rather better adults than you have been, which may be a little challenging considering your guys credentials, but the way progress happens is because new generations and new eras grow and develop and become better than the previous ones. It’s the reason we’re not in the Dark Ages anymore. No matter your position of place in life, it is imperative to create opportunities for children so that we can grow up to blow you away.

Adults and fellow TEDsters, you need to listen and learn from kids and trust us and expect more from us. You must lend and ear today, because we are the leaders of tomorrow. Which means we’re going to be taking care of you when you’re old and senile. (No, just kidding, actually). No, really, we are going to be the next generation, the ones who will bring this world forward. And in case you don’t think that this really has meaning for you, remember that cloning is possible, and that involves going through childhood again in which case, you’ll want to be heard just like my generation.

Now, the world needs opportunities for new leaders and new ideas. Kids need opportunities to lead and succeed. Are you ready to make the match? Because the world’s problems shouldn’t be the human family’s heirloom.

The key highlights for me are underlined above, statements and sentiments that are worth considering for further implications in real life education, sociology, and cultural development. In addition, there are other observations and lessons we ought to learn.

1. The Power of Context. There is no doubt that she is naturally gifted. However, the environment around her, namely her parents, was absolutely critical in fostering her growth and exploiting her natural gifting to their greatest potential. Most definitely, had her environment been different, her development and opportunities would be drastically different, most likely to the detriment. While showing this to my volunteer team, regarding the question of environment and the things around her that helped make her this way, one comment arose, “Yeah, she’s rich. (laughter)” True and fair enough. But that only proves the point. Environment matters. And, it means all aspects of environment, including socio-economic, cultural sentiments and values, perceptions and expectations, etc. Would that we all understand the importance of the roles we play in creating environments and experiences that allow others around us to thrive to their maximum potential.

2. The Potential of the Young. There’s no doubt that this young lady is a prodigy. Few 30-year-olds I know have the vocabulary and literary skills she does! 🙂 (One of my volunteers joking commented, “Did she just insult us? I think she did?!) However, let us not miss the possibility that young people are highly capable of accomplishing a lot more than we perhaps understand. And, if we took to heart her comment, “We love challenges, but when expectations are low, trust me, we will sink to them,” and strove to reverse the trend of low expectations, then I truly believe we would be witness to a greater humanity.

3. The Actual Content of Her Talk. The issues of “age-discriminatory” terms, the need for “certain types of irrational thinking,” the power of inspirational thinking and dreaming, the exercise of oppression as a response to mistrust, the goal of progressive adulthood, (and other themes) are all elements of humanity that warrant our attention. I appreciate the crafting of the talk (and am curious how much assistance she had in writing it), as it wove together various themes with a logical connection not often seen in these kinds of connections.

4. The Paradox of the Novelty. On the critique side, there is a danger of this kind of talk from this kind of a person. Back to my volunteer team and college students. Some other responses were laughter and chiding at this youngster as a (and they did not say this exact phrase, but this is what they meant), “freak of nature.” Comments like, “Where in the world did she come from?” and more aggressively, “What is wrong with her parents?” and “She should be out playing in the dirt,” highlighted both the cultural conflicts of the audience, and the “novelty” of this kind of prodigy, a novelty that may have a backfiring effect. A general sentiment was not to be inspired, but rather to feel subversively insulted and “put-down,” causing a subtle “bolstering” of one’s own personal experience of “normal.”

I have to tell you honestly, this concerned me. I’m not sure I can articulate all the reasons ‘why’ at the moment, but there is an unsettled feeling that I have about a culture that responses defensively to “greatness” (and I understand the potentially pejorative connotation of using that word) rather than being “inspired” to change, or to “hope” for something better. It appears that there are large segments of our population that are merely content with mediocrity and a lack of discipline to strive for something more. I hope I’m not being to cynical, but that did seem to be what I personally observed as I shared this with my community groups.

Perhaps this is just me being “childish?” 🙂