A family member of mine is involved with this, and so I’m doing my part to perpetuate it and get the word out. Be sure to visit the site (http://callandresponse.com/home.html), and see the film. 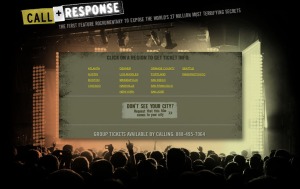 CALL+RESPONSE is a first of its kind feature documentary film that reveals the world’s 27 million dirtiest secrets: there are more slaves today than ever before in human history. CALL+RESPONSE goes deep undercover where slavery is thriving from the child brothels of Cambodia to the slave brick kilns of rural India to reveal that in 2007, Slave Traders made more money than Google, Nike and Starbucks combined.

Music is part of the movement against human slavery. Dr. Cornel West connects the music of the American slave fields to the popular music we listen to today, and offers this connection as a rallying cry for the modern abolitionist movement currently brewing.

VIA: What does love look like? Thanks to Justin Dillon and the crew, we have a great example and picture that inspires us to do something about the plight of modern day slavery.

Just a quick note to let you know that the film’s new official site is now live. This is not just about the film; it is about giving you more ways to free the 27 million men, women, and children enslaved around the globe. In the coming days we will launch a way for you to help fund small dollar projects (supported by our partner organizations) that respond to the immediate needs of victims.

We are attempting to do something that has never been done before.

A non-corporate, all-volunteer, all grassroots, all artist-led effort to move people from awareness to action. Awareness is a 90’s word. Now is the time for action.

Action begins with making sure that every seat in every theater is sold starting on Oct 9. Remember, this is a non-profit film — every dollar goes back into the cause. The best way to get involved is to a) buy 1, 5, 10, even a whole theater of tickets, and b) join or log-in to our growing abolitionist network at betheresponse.com and invite 5 friends to join you!

Remember, justice is what love looks like in public.