Malcolm X and the Psychosis of Race in America

As part of the series of posts on race relations in America in this blog, I am listening with new ears, diving into the psychosis of this kind of rhetoric (and I mean that phrase in the technical definitions). I listened to Malcolm X’s speech entitled “The Ballot or the Bullet” delivered April 12, 1964 in Detroit, MI, and watched the 3hr. 21min. “Malcom X” film by Spike Lee.

What I share below are some of the things I’m am perceiving, as well as learning about this particular figure and his movement. 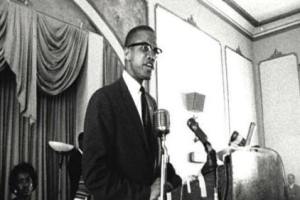 At face value, the discussion of “Black Nationalism” followed by statements of accusation that Billy Graham is preaching “white nationalism,” (i.e. the structure of the church) is concerning. It appears that Malcolm’s global classification of another race seems to be the very kind of evil that he is fighting against. His labeling of others as “devil” and “hypocrites” is a vehement rhetoric that simply inflames the issue, rather than quells it. It is an “eye for eye” response that, as history has taught us, only exacerbates the evils that exist.

Now, it must be said, that the impulse to speak in that manner, and the anger from which this kind of discussion comes can be greatly understood in light of the history of racism in this country. One must validate that the KKK, white supremacy, segregation, preferential treatment, etc., all go a long way towards doing massive damage to a people’s sense of identity and humanity. Anyone mis-treated instinctively counter-acts.

But what I saw in the life of Malcolm, was an ability to change and adapt. If the quotes are correct, there was a rescinding in Malcolm’s later years of some of his approaches to the issues at hand. Being a contemporary of Martin Luther King Jr., this posed a tension in the Black community (religiously and philosophically) as to the best ways to approach the injustices they were facing. But his willingness to grow, mature, and see things from new lights must be applauded. Though his methods were not always conventional or wise, his striving for truth, and a betterment, not only of society, but of himself is an ethic we all ought to live by and value.

How did this come about for him? It appears, from Wikipedia and the movie, that it was his pilgrimmage travels that opened his eyes to a new kind of thinking and solutions to the problems we find here in America.

CONTRAST. In everything in life, what we know about ourselves and our situation is discovered through contrasting it to something else. The follow-up principle of that is EXPOSURE. We must be willing to expose ourselves to different ways of thinking, and different streams of philosophy in order to really, and truly understand our own. And this is the catch-22 of racism, and perhaps one of the simplest and most profound solutions to the issue. Are we willing to recognize the differences of culture and race in our world, and are we willing to open up our hearts and engage at a deep level, relationally with other people groups? Racism says no. The solution to racism is simply saying “yes.”