The Big Exposure of “EXPELLED” 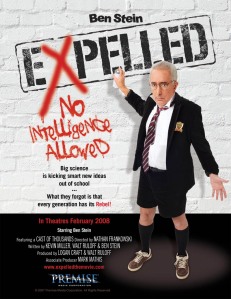 After seeing the movie today, I decided to collect some data so as to ensure a more informed and thoughtfully “intelligent” response to all that is happening regarding this movie, and the general issues surrounding Darwinian Evolution & Intelligent Design. I hope to post my review and response soon.

Greg Laden has a massive collection of blogs on his post, so no need to duplicate that work. His list is fairly one-sided, however, hosted by scienceblogs.com.

Past The Popcorn – A fairly balanced review.

Rotten Tomatoes currently holds a 9% fresh rating (very, very low) stating consensus as “A cynical political stunt in the guise of a documentary.”

Ben Stein of course has his own website (?), and information at Wikipedia. The movie “Expelled,” according to its website, boasts the largest U.S. opening for a documentary film; scheduled for over 1,000 theatres. www.expelledthemovie.com.

William Dembski is one of the interviewed people in the movie, and one of the most well known authors on Intelligent Design.

PZ Meyer’s blog “Pharyngula” – personal testimony of being asked to leave the Expelled showing. His most recent post is a video rebuttal of Stein.

Richard Dawkins, a key figure in the film (and in the cultural discourse) has his response post entitled “Lying for Jesus.”

PZ Meyers and Richard Dawkins discuss their expulsion from Expelled on YouTube.

Though not in the film, I felt it appropriate to add Francis Collins, a popular lecturer and author on the subject as well. He recently spoke at the Washington National Cathedral (video and audio here), Stanford University (video or mp3 here), and Grace Cathedral has an interview with him here.

The National Center for Science Education has several posts and responses to the movie.

The Discovery Institute has several links to people in the film.

Scientific America has several articles, including “Six Things Ben Stein Does not Want You To Know.”

Time Magazine has written Ben Stein Dukes It Out With Darwin, a very short critical article on the film.

Illustra Media has released some new teaching DVD’s for churches that clearly has an Intelligent Design bent and bias.

The California Academy of Science is preparing to celebrate Darwin’s 200th birthday, February 12, 2009! It also has this Official Evolution Statement on their website.

Of Pandas and People was a controversial textbook published in the 90s espousing the idea of Intelligent Design. Wikipedia article here.

Eugenics was a theme in the movie, and Wikipedia’s article here is good, and there’s plenty from a Google search.

Go to EXPELLED: An Unintelligently Designed and Devolving Debate.